The Necronomnomnomicon: Cookbook of the Dead
Click to view/download 6 free chapters!
Click to buy a Softcover Book or on Kindle

The Harrison family is dragged into the bizarre world of the supernatural as they become the pawns of the Cookbook of the Dead in its bid to bring on its supernaturally flavored apocalypse. Boy, the family dog struggles to keep his family out of the Frying pan AND the fire as he defeats the Cookbook’s minions along the way.

Piers Anthony has this to say about The NecroNomNomNomicon: The cookbook of the Dead:

“…a rather original story centered on fantastic cooking – literally fantastic, literally cooking – merged with a boy and dog story. It’s pretty wild from the start, with the boy’s mother a superlatively bad cook getting into a televised cooking contest, and demonic figures being fended off by the dog. There is romance along the way, and plotting by evil figures, and of course that carnivorous sheep.. I think young readers will like it.” -Piers Anthony

The Necronomnomnomicon: A Recipe for Disaster
Click to buy a Softcover Book or on Kindle 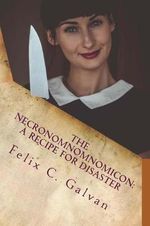 In this, the sequel to The Cookbook of the Dead, The Harrison family arrives back home from the magical mayhem of the Überchef! season shoot, there is no time to relax, as Althea learns that she has outstanding magical potential, and tries to join the magical community

The Necronomnomnomicon: A Recipe for Disaster
Click to buy a Softcover Book or on Kindle

In this, the third book in the NecroNomNomNomicon series, Boy steps up and organizes a resistance force against the Elves who are headed back to Earth to clean house. Luckily, he has gathered a diverse crew to serve under him and found an unlikely ally along the way!